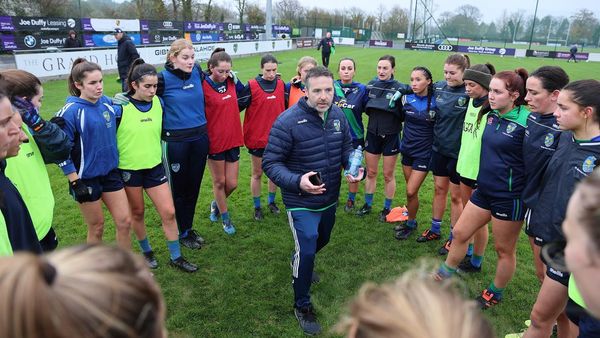 Just two days to go until our women’s #Currentaccount All Ireland Intermediate Club Championship Quarter Final! 500 tickets are sold out and excitement is at fever pitch in our small parish.  A year on from his appointment as Syl’s Senior Ladies Manager, Anthony Cook is leading the team into our Club’s first All-Ireland Quarter Final. He pays testament to the squad and supporters in this incredible achievement.

He says, ‘This season has been an incredible experience. I’ve watched the pride the players have representing the club grow with every step we’ve taken in this championship so far. That’s all driven by the support they’ve had from the club. A special mention though has to go to the Syls Juvenile players who have hand-made posters, written poems & limericks and turned out in big numbers to provide support in all weathers, home & away. All have a kick-around at halftime which puts a smile on everyone’s face too.
Team captain Dannielle Lawless may have had a run of bad luck with an injury earlier in the Championship but is relishing the battle this Saturday will bring. She says,  ‘Preparation has been good and we’re really looking forward to the challenge ahead’
She adds, 'The club is delighted to host Holloway Gaels traveling from London to Broomfield for the game. They’re promised a fantastic welcome.
Everyone at Syls wishes our ladies the very best of luck on Saturday. Those with tickets - lucky you! Those without can watch the live stream on @jeromequinn1 link Live Stream